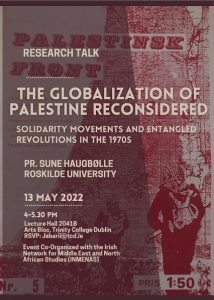 You are invited to attend a fascinating lecture by Prof. Sune Haugbolle on Friday 13th May at 4pm in the Lecture Hall 2041B, Arts Block, Trinity College Dublin.

Attendance is open to all and widely encouraged (students, junior and senior researchers, and members of civil society).

Abstract: From the late 1960s, Palestine solidarity developed globally as an ‘entangled’ project aligning the energies and ambitions of the Palestinian liberation movement with various progressive, revolutionary forces. One of the main archival sources for reconstructing this entangled project is cultural production by Palestinian institutions such as the PLO research center, and by activists in various settings around the world. Whereas the art and films of the PLO, which has recently received some scholarly attention, help to elucidate the Palestinian strategies, solidarity magazines offer different insights. The talk argues that solidarity magazines represent a particularly elaborate genre for studying how visual and ideological registers were constructed, travelled, and changed in the entangled milieus of solidarity movements. Drawing on a series of magazines and interviews with former activists of Palestine solidarity movements, this talk asks: who curated the struggle? How did these collectives and networks of global solidarity develop? And which power relations and hierarchies were involved in the exchange?

About: Sune Haugbolle is Professor of Global Studies at Roskilde University, Denmark. He is author of several books on media and cultural history of the Middle East including War and Memory in Lebanon (2010), Rhetoric of the Image (2012), and The Arab Archive (2020). He is co-editor of Middle East Journal of Culture and Communication and directs the research project “Entangled Histories of Palestine and the Global New Left.”

Hosted by TCD and INMENAS – the Irish Network for Middle Eastern and North African Studies.