[Dublin] Launch of the ‘End the Irish Arms Trade With Israel’ campaign, 11.30am in Buswell’s Hotel 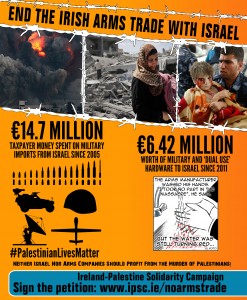 The Ireland-Palestine Solidarity Campaign (IPSC) will tomorrow, Wednesday 1st April, officially launch the ‘End the Irish Arms Trade with Israel’ campaign at a press conference at 11.30am in Buswell’s Hotel, Molesworth Street, Dublin 2.

The campaign calls upon the Irish government to place an immediate arms embargo upon the state of Israel. The launch will coincide with Palestinian accession to the International Criminal Court on the same day.

SPEAKERS AT THE LAUNCH WILL INCLUDE:

YOTAM FELDMAN, is an Israeli filmmaker and journalist. He has directed the award-winning film ‘The Lab’, about the Israeli arms industry (currently touring Ireland), and worked for Haaretz as an investigative journalist writing about issues concerning the relationship between military operations and financial profit, arms deals, and the ‘national security’ industry. He will provide a unique, insider’s perspective.

MAHMOUD ALHAJ, is a Palestinian from the Nablus region of the occupied West Bank who now lives and works as a telecom IT software professional in Ireland, and wlll be giving a Palestinian perspective, explaining how the sterile phrases employed by the arms industry translate into horrific death and destruction for the people of Palestine.

ELAINE BRADLEY, is is former CEO of Volunteering Ireland and an Organisational Consultant who has worked with governments, the UN and the EU, is now an activist for human rights in Palestine. Elaine has recently returned from 8 months in Gaza and the West Bank, including during the latest Israeli offensive last summer. She will give an eyewitness perspective from the ground in Gaza, and explain Irish academia’s ties to the Israeli arms industry.

Dr. DAVID LANDY, Is an Irish-Jewish an author, activist, scholar and a sociology lecturer in Trinity College Dublin. He is a former Chairperson of the IPSC, and currently sits on its national committee, and is a founding member of Academics For Palestine. He is the author of “Jewish Identity and Palestinian Rights: Diaspora Jewish Opposition to Israel”, and currently researching historical and contemporary solidarity movements in Ireland. He will chair the meeting and provide an overview of the campaign’s rationale and goals

Later on Wednesday, the campaign will host it’s first event in Dublin, the screening of Israeli director Yotam Feldman’s award-winning film about The Lab at 7pm in the Thomas Davis Theatre in Trinity College’s Arts Block. The film is an exposé which shines a light on the military-industrial complex in Israel and explores how it is helping to turn Palestine’s blood into Israel’s profit, and is currently touring Ireland with its director.

Mr Feldman has criticised Western double standards when it comes to Israel, saying that “the world is hypocritical. Many of those governments, in Europe especially, which are criticizing Israel for the use of military force against civilians and collateral damage etc, are the same governments which are buying weapons from Israel and which are allowing Israel to produce new weapons and use new weapons in Gaza. After every attack on Gaza, the Israeli arms manufacturers do bigger business than ever before.”

WHY AN ARMS EMBARGO?

According to government figures, Ireland has bought €14.7m worth of arms and military components from Israel over the last decade, while Irish-based companies have exported €6.42m worth of military and ‘dual use’ hardware to Israel since 2011.

Military items exported from Israel will have used Palestinians as ‘human test subjects’ so such weapons can be marketed as ‘battle proven’; Israel has killed over 9,000 Palestinians, including 2,060 children since 2000 and tens of thousands more injured. Any military components exported to Israel will be used to kill and maim yet more Palestinians and to entrench the decades-long military occupation. Neither Israel nor arms manufacturers in Ireland should be allowed to profit from the killing of Palestinians; this trade in death must end.

Therefore we are calling upon the government of Ireland to end the Irish arms trade with Israel, and to advocate for an international arms embargo at EU and UN levels until Israel ends the occupation of Palestinian land and complies fully with its obligations under international law.

WHAT TYPE OF EQUIPMENT IS BEING TRADED?

Similarly, all military components that are exported from Ireland are used to destroy Palestinian lives and livelihoods. Last summer we all watched in horror as Israeli occupation forces brutally assaulted the largely defenceless population of Gaza, killing over 2,200 people (70% civilians), wounding thousands more, leaving over 100,000 homeless, and destroying homes, medical facilities, schools and infrastructure. By allowing military exports to Israel, Ireland has sadly played a role in enabling these, and many other crimes against the people of Palestine. It is a shame and a stain upon our state. It’s time to end this trade in death.

WHO SUPPORTS THIS CAMPAIGN?