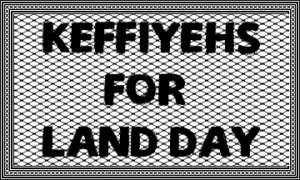 Join us this Saturday 29th March from 1pm to 2.30pm at The Spire on O’Connell Street, Dublin 1 in a vigil to commemorate Palestinian Land Day and celebrate Palestinian resistance to Israel’s ongoing land expropriation, colonisation, occupation and apartheid. We are asking people to wear Black & White Keffiyeh Scarves if they have them.

Thirty-eight years after the first Land Day demonstrations, Israel continues its expropriation and colonization of Palestinian land. Israel continues to expand its illegal settlements in occupied Palestinian territory, forcing Palestinians from their land. Palestinians also face dispossession and displacement inside Israel. Inside Israel, Palestinian citizens still face severe discrimination regarding access to land and housing and in the Naqab/Negev desert the Israeli government entertains ideas about driving tens of thousands of Palestiniain Bedouins from their ancestral homelands to make way for the ‘Judaization’ of the area.

For all of these ongoing crimes Israel has acted with impunity, as the international community has failed to take action to stop them. Therefore, international civil society has mobilised in support of the Palestinian call for Boycott, Divestment and Sanctions against Israel until it ends its occupation and fulfills its obligations under international law. Join us to commemorate and celebrate the ongoing Palestinian resistance. 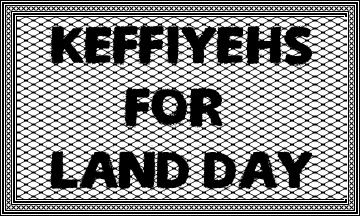