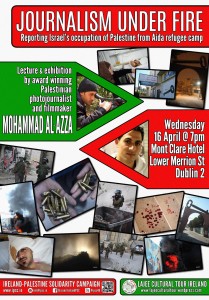 You are invited to a lecture and exhibition by Palestinian photographer and filmmaker Mohammad Al-Azza on Wednesday 16th April, 7pm in the Mont Clare Hotel, 1-4 Lower Merrion Street, Dublin 2 (PLEASE NOTE the change of venue, due to unavoidable circumstances).

Mohammad Al-Azza is a 24-year-old photographer and award winning filmmaker and the Director of the Media Unit in the Lajee Cultural Center, Aida Refugee Camp, Bethlehem. Mohammed is travelling to Ireland as part of the Lajee Cultural Tour and will speak about life as a journalist in Palestine and the difficulties facing the community living in Aida Refugee Camp under the military occupation.

This is a unique opportunity for people in Ireland to hear about the daily struggles and violence facing those living in the camp and to witness the resilience and resistance of these communities through the work, images and words of Mohammed Al-Azza.

Mohammad is a refugee from the village of Beit Jibreen who was born and lives in Aida Refugee Camp. In addition to his own video and photographic chronicling of events in his home community, he helps youth to produce photography and video projects. He began learning photography and documentary production as a teenager in the Lajee Center in 2005. His first documentary, Ali Wall, won the Global Jury Prize of the It Is Apartheid Film Contest (2010), and his documentary Everyday Nakba (2011) has mobilized an international movement to improve access to clean water in Aida Refugee Camp and other Palestinian communities.

On the 8 April 2013 Mohammad was shot in the face by Israeli forces as he photographed them engaging in clashes with young people in the camp. He has undergone several surgeries. On release from hospital both he and his family were targeted. He was violently arrested by the Israeli army in July 2013.

Organised by Lajee Cultural Tour Ireland in association with the Ireland-Palestine Solidarity Campaign.