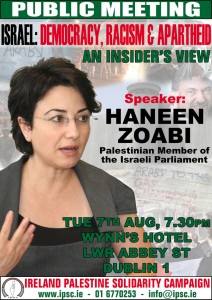 The Ireland Palestine Solidarity Campaign (IPSC) is proud to invite you to a public talk by Haneen Zoabi MK, a Palestinian member of the Israeli Parliament on Tuesday 7th August in Wynn’s Hotel, Lower Abbey Street, Dublin 1 at 7.30pm.

This is a rare opportunity to find out directly from a public representative in the Israeli parliament how the self proclaimed “only democracy in the Middle East” truly functions. It promises to be an informative and eye-opening experience, and will afford those in attendance the opportunity to learn about issues relating to both the Israeli occupation of Palestine and the continuing erosion of democratic freedoms inside Israel, including the crackdown on the work of domestic and international NGOs.