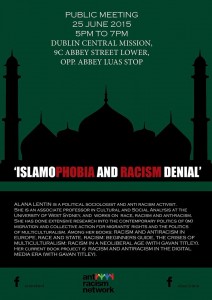 Anti Racism Network Ireland (ARN) invites you to the public meeting on ‘Islamophobia and Racism Denial’ with Alana Lentin a Australian based political sociologist and anti racism activist.

Alana Lentin is an associate professor in Cultural and Social Analysis at the University of West Sydney, and works on race, racism and anti-racism. She has done extensive research into the contemporary politics of (im)migration and collective action for migrants’ rights and the politics of multiculturalism. Among her books: Racism and Antiracism in Europe, Race and State, Racism: Beginners Guide, The Crises of Multiculturalism: Racism in a Neoliberal Age (with Gavan Titley). Her current book project is Racism and Antiracism in the Digital Media Era (with Gavan Titley).