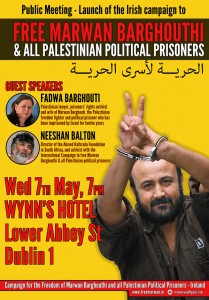 You are cordially invited to a public meeting that will see the Irish launch of the international ‘Campaign for the Freedom of Marwan Barghouthi and All Palestinian Political Prisoners’. The meeting will take place on Wednesday 7th May at 7pm in Wynn’s Hotel, Lower Abbey Street, Dublin 1 and will be addressed by Marwan’s wife Fawda Barghouthi and Neeshan Balton of the Ahmed Kathrada Foundation in South Africa.

This is launch of the official Irish affiliate to the International Campaign, which itself was launched from Nelson Mandela’s cell in the apartheid-era prison on Robben Island in October 2013.

Marwan Barghouthi is a Palestinian freedom fighter and political leader who has been imprisoned by Israel for the past 12 years. Among the over 5,000 Palestinian political prisoners held by Israel, his name has emerged, both nationally and internationally, as central for unity, freedom and peace.

FADWA BARGHOUTHI is a Palestinian lawyer, activist and tireless campaigner for the rights and freedoms of Palestinian political prisoners. Fawdwa is a member the council of the Fatah Palestinian liberation movement, and together with Marwan has three children whom she has raised alone for the past 12 years.

NEESHAN BALTON is the Director of the Ahmed Kathrada Foundation in South Africa, an organisation that has been central to the Campaign to Free Marwan Barghouthi and All Palestinian Political Prisoners. Kathrada was a cellmate of Nelson Mandela on Robben Island during the struggle against Apartheid in South Africa, and the campaign was launched internationally from Mandela’s cell in October 2013.

For more information about the Irish campaign see: http://www.freemarwan.ie

For more information about the international campaign see: http://www.fmaapp.org