[Dublin] Information Evening: Find Out About Volunteering In Palestine 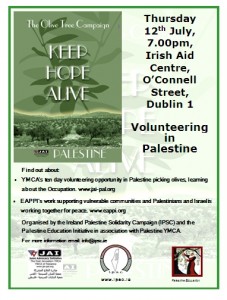 An information evening about volunteering in Palestine.

Palestine YMCA offer a ten day volunteering opportunity in Palestine. Volunteers pick olives and plant olive trees, help farmers stay on their land and learn about the Occupation. Their next tour takes place this October

EAPPI runs a longer term volunteer programme. Volunteers accompany Palestinians and Israelis in their non-violent actions, help vulnerable communities protect themselves and once home, engage in advocacy to end the Occupation.

The speakers are Richard Irvine and Barbara Walshe.
Richard Irvine’s background is in education and human rights law. He has taught a history of the Israel-Palestine Conflict at Queen’s University since 2005 and has worked as a volunteer in the Palestinian refugee camps in Lebanon and with the YMCA in Palestine. He is co-ordinator of the Palestine Education Initiative and Education Officer for the Ireland Palestine Solidarity Campaign.

Barbara Walshe has a background and works in community development, advocacy, dialogue and post conflict peace building. Some experiences of her time working as an EAPPI volunteer in 2009 can be heard at http://www.rte.ie/radio1/doconone/radio-documentary-witness-at-checkpoint300.html.

Organised by the YMCA of Palestine in association with the Ireland Palestine Solidarity Campaign and the Palestine Education Initiative.