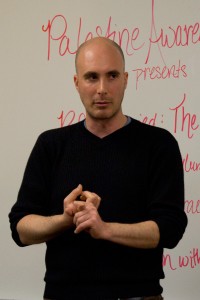 To mark the first anniversary of the start of the 51-day Israeli bombardment of Gaza last summer that left 2200 Palestinians dead, including 556 children, PalFest Ireland presents “Incited in Israel, Inflicted on Gaza – Hate”, with campaigning anti-racist journalist David Sheen. This will be preceded by a witness report from Gaza by Garry Walsh of Trocaire, based on his recent visit.

How could 2200 Palestinians be killed in 51 days last summer in Gaza with impunity by Israel? What is going on in Israel that creates an atmosphere where such a brutal attack on a people forbidden to leave can be inflicted? How can such a siege be visited on Gaza again and again, coupled with a crippling occupation of the whole of Palestine?

For the past five years, Canadian-born David Sheen has been reporting from inside Israel on the frightening levels of anti-Palestinian and other forms of racism that pervade Israeli society, inform government policy and incite vigilante attacks. “Without wide exposure, this persecution will not end on its own” says Sheen, whose writing has been published in Ha’aretz, Alternet, the Nation, Huffington Post, Al Jazeera, Electronic Intifada and other outlets. He testified to the Russell Tribunal on Palestine, and before the European Parliament and the German Parliament. He is also writing a full-length book based on his reporting.

“As I visited neighbourhoods in Gaza that lay completely in ruins, the scenes reminded me of images of European cities after World War II” – Garry Walsh, Trocaire.

PalFest Ireland sees the expression of suppressed truth as one of the basic functions of art. Without it, we are at the mercy of the money-spinning pr industry. How is the consensus manufactured in Israel that lets this relentless horror be inflicted in their name – and, by our complicit inaction, in ours? David Sheen explains how it’s done.

The evening will open with musician Mick Blake’s composition Another Child, Another War, with video projection.