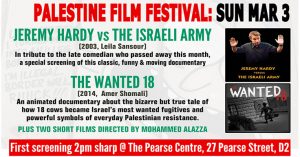 Entry is to each film is free, on a first-come basis.

Following each feature film, we will also be screening two short documentary films from Palestinian filmmaker and photo journalist Mohammad Alazza, from the Aida refugee camp in Bethlehem.

In tribute to the late, great comedian who passed away this month, a special screening of this classic, funny & moving documentary.

In 2002, at the height of Israel’s re-occuaption of the West Bank, British comedian Jeremy Hardy goes to Palestine to join the International Solidarity Movement in nonviolent protests. However the ISM protesters are fired upon in by the Israeli military, and after being confined to a hotel, Hardy is evacuated by the British consulate and sent back to London. He then returns to help US volunteers take medical supplies into the West Bank.

Take My Pictures for Me
Dir: Mohammad Alazza, 2016
Runtime: 29mins

Amahl and Mohammad are both Palestinian, but Mohammad is a refugee born in the West Bank, while Amahl holds an Israeli passport and was born in the US. When Amahl went to a protest for refugee rights in Israel and saw there many of Mohammad’s American and European colleagues, she called him in frustration that he could not be there because of Israel’s movement restrictions. He replied with a generous provocation: “Why don’t you take pictures for me?” From there begins an exchange of photographs and a set of video explorations about expression, mobility, Palestinian collectivity, and the limits of what one friend can do for another.

An enchanting, inspirational tribute to the ingenuity and power of grassroots Palestinian activism.

Through a clever mix of stop motion animation and interviews, The Wanted 18 recreates an astonishing true story: the Israeli army’s pursuit of 18 cows, whose independent milk production on a Palestinian collective farm was declared a threat to the national security of the state of Israel. During the first intifada, a group of people from the town of Beit Sahour decide to buy 18 cows and produce their own milk as a co-operative. Their venture is so successful that the collective farm becomes a landmark, and the cows local celebrities – until the Israeli army takes note and declares that the farm illegal. Consequently, the dairy is forced to go underground, the cows continuing to produce their Intifada milk with the Israeli army in relentless pursuit.

A portrayal of the lived realities of the children under Israel’s military occupation, Bethlehem in Aida refugee camp, “one of the most tear gassed place in the world”.