[Dublin] IAW 2015: Trade Unions and the Struggle for Justice in Palestine (TUFP) 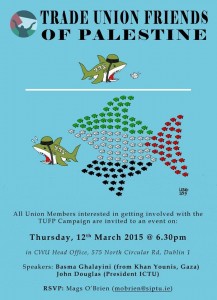 To mark Israeli Apartheid Week, Trade Union Friends of Palestine will be hosting a discussion on the role of the labour movement in supporting the people of Palestine.  The event takes place on Thursday 12 March @ 6.30pm in the CWU Head Office, 575 North Circular Road, Dublin 1