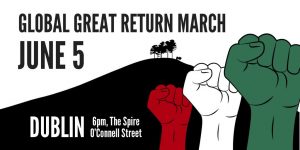 Palestinians on the Great Return March in Gaza have called for internationals to take to the streets on June 5th to mark 51 years of the Israeli occupation and ongoing illegal colonisation of the West Bank and Gaza.

In Dublin the Ireland-Palestine Solidarity Campaign and our colleagues in other groups will be taking to the street between 6pm and 7pm at the Spire on O’Connell Street. We ask you to join us to show your solidarity with the Palestinian people’s ongoing struggle for Freedom, Justice and Equality.

Organised by the IPSC Dublin branch supported by Trade Union Friends of Palestine, Academics for Palestine, Gaza Action Ireland and Students for Justice in Palestine.