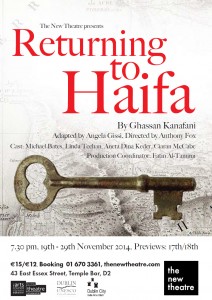 An adaptation of one of the most iconic works of Palestinian literature is coming to the stage in Dublin between 17th and 29th November. Following each performance of Ghassan Kanafani’s classic work about Palestinian refugees, there will be a conversations on aspects of the Palestinian struggle for justice featuring leading Palestinian, Irish and international experts, academics, activists in discussion with prominent chairs. Details of these talks are below.

On 28th and 29th November (the latter being UN International Day of Solidarity With the Palestinian People), the author’s wife, Anni Kanafani, will take part in the post-show discussions, talking about the life and work of her late partner, who was assassinated (along with his teenage niece) in a car bomb in Beirut by the Israeli Mossad in 1972.

The Ireland-Palestine Solidarity Campaign is honoured to have been able to assist in arranging many of these speakers, especially the visit of Mrs. Kanafani, and we encourage all our members and supporters to attend the play.

There will be post-show discussions from Wednesday 19th November onwards, featuring:

Mon 24 – Jihad Jaara and Rami Kamel (Palestinian exiles from the Siege of the
Church of the Nativity)
Chairperson: Freda Hughes (Media officer of the IPSC and radio producer)

Tue 25 – Jihad Jaara and Rami Kamel (Palestinian exiles from the Siege of the
Church of the Nativity)
Chairperson: Harry Browne (Journalist and academic)

Fri 28 – Anni Kanafani (Wife of the author and Director of the Ghassan Kanafani Cultural Foundation)
Chairperson: Dr. Conor McCarthy (Academic and specialist in the work of Palestinian intellectual Edward Said)