[Dublin] Gaza One Year On: End the Irish Arms Trade With Israel – stall and leafleting (IPSC) 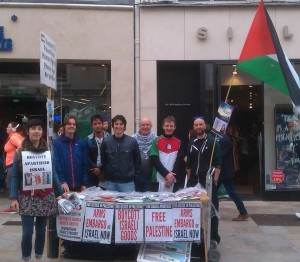 This Saturday 5th September the Dublin IPSC will commemorate the end of last year’s horrific Israeli assault on Gaza that killed over 2,200 people (including more than 500 children), wounded thousands more and left the tiny coastal strip utterly devastated. We will have the our usual information street stall on Grafton Street between 12pm and 4pm, but with extra visual materials (placards, banners etc.) and a particular focus on calling for an End to the Irish arms trade with Israel.

We asking as many people as possible could to come along and help make our presence felt on Grafton Street, and to remind the public that Gaza still suffers the consequences of last year’s assault as well as previous assaults and the ongoing blockade by Israel. Even if you can only come along for an hour, we would appreciate it. We need to get the message that the despicable bi-lateral arms trade between Ireland and Israel has to be brought to an end. Neither Israel nor arms manufacturers should be allowed to profit from the killing and devastation wrought upon the people of Palestine.

So please join us on Grafton Street (near the Disney shop), Dublin 2 on Saturday 5th September between 12pm and 4pm.

Also, you haven’t already signed the petition to end the Irish arms trade with Israel please do so here, thank you.