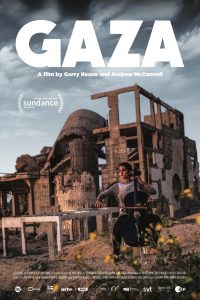 The 18.30 screening on Friday 9th in the Irish Film Institute will be followed by a Q&A with directors Garry Keane and Andrew McConnell, hosted by Deirdre O’Kane. Click HERE TO BOOK tickets.

This portrait immerses us in the heart of the Gaza Strip among an eloquent and resilient cast of characters under siege. Blockaded by Israel and Egypt, they are witness to regular confrontations between Israel security forces and Hamas, and are impoverished, unemployed and have minimal access to water and electricity. We meet a Gaza City taxi driver who chats with his passengers with surprising humour and candour; a young boy struggling in school but hoping to own a fishing boat; and a young cellist studying law and dreaming of escape.

Gaza is wholly cinematic in intent and delivery, with its breathtaking cinematography, orchestral score and masterful editing. In adding human texture and narrative heft to a story that appears only as a conflict zone in news media, the filmmakers have illuminated their viewers and greatly ennobled their subjects.

Hosted by the Irish Film Institute.