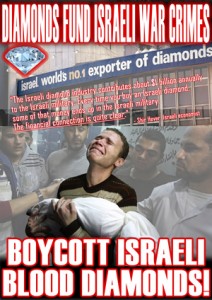 On Saturday 24th November, Anne Clinton from Limerick will display her disgust that diamonds are bankrolling Israeli war crimes and gross human rights violations against the people of Gaza by having two diamond rings and diamond earrings given to her by her husband over a decade ago crushed to dust on Dublin’s Grafton Street at 2.30pm.

Anne says: “Having learned that diamonds are a major source of funding for the Israeli military which is again mercilessly bombing innocent men, women and children in Gaza, I am disgusted every time I look my diamond jewellery. What I once thought of as symbols of love have now lost their emotional appeal and I feel utterly repulsed by them. In comparison to human life, diamonds are worthless. I want every woman, every mother, and every sister to think of the children in Gaza being butchered and terrorised by Israeli war criminals that are funded to the tune of over $1 billion per year in revenue from the Israeli diamond industry.”

In 2010, Israeli economist Shir Hever has stated that: “Overall the Israeli diamond industry contributes about $1 billion annually to the Israeli military and security industries … every time somebody buys a diamond that was exported from Israel some of that money ends up in the Israeli military so the financial connection is quite clear“.

Diamonds are Israel’s most important export commodity, accounting for 30% of manufacturing exports, worth $22 billion in 2011. Even though diamonds from Israel fund the Israeli military which stands accused of war crimes by the Human Rights Council, the jewellery industry allows these blood diamonds to contaminate the diamond market masquerading as conflict-free diamonds. Despite numerous calls for the diamond industry to end the trade all diamonds that fund human rights violations the international diamond regulatory system known as the Kimberley Process insists the regulations should only apply to rough diamonds thus allowing cut and polished blood diamonds to evade scrutiny. The KP refuses to even call for laser-inscription on diamonds so consumers can make an informed choice about where the diamonds they are buying come from.