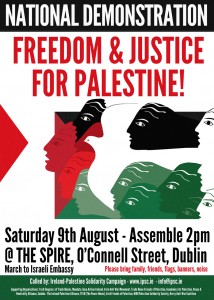 The past month has seen protests for Gaza taking place in countless towns and cities around Ireland. Thousands upon thousands of people have come out onto the street to call for an end to ongoing Israeli injustices against the Palestinian people.

We believe it is time for us all to get together, so the Ireland-Palestine Solidarity Campaign is calling for a NATIONAL DEMONSTRATION in Dublin on Saturday 9th August, assembling at 2pm at The Spire, O’Connell Street. From there we will be marching to the Israeli Embassy.

Please bring friends, flags, banners, noise. We would ask that you do not bring party-political flags (Irish, Palestinian or others).

We are also asking people to bring a child’s toy which will me given to the Gaza Toy Drive.

If you are one of the organisers of the numerous protests that have taken place around the country, we would ask you to try to mobilise people to come to Dublin and take to the streets of the capital to voice our outrage and to make a simple call – “It is time for freedom and justice for Palestine”. What has been happening in Gaza is just the latest in a long line of injustices perpetrated against the people of Palestine since at least 1947. If you are organising buses or other transport, please let us know and we will publicise it.

With 700,000+ Palestinians ethnically cleansed from their homes to facilitate the creation of the Zionist state of Israel in 1948, the brutal military occupation of the remainder of their lands from 1967, the implementation of a vicious Apartheid system that denies rights to Palestinians both in the occupied territories and within Israel, regular large scale massacres like the one we are witnessing in Gaza today, and millions of refugees denied their Right of Return, the Palestinian people have remained steadfast in their resistance and their search of freedom, justice, equality and a lasting peace.

Join us this Saturday to say “Enough! Khalas! Freedom and Justice For Palestine!”