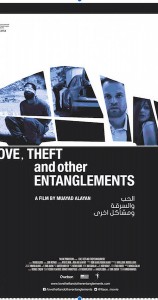 Love, Theft and Other Entanglements
Time: 15:15

Irish Premiere
Mousa gets into the trouble of his life when he steals the wrong car. What he thought was an Israeli car and an easy way to make money in his impoverished Palestinian refugee camp turns out to be a load of misfortune when he discovers a kidnapped Israeli soldier in the trunk.
Mousa’s hopes of paying the bribe that will guarantee him an exit visa out of the country and away from his wrecked love affair dissipate as he finds himself on the run from Palestinian militias and the Israeli intelligence.
Director: Muayad Alayan
90 mins / Pales,ne // 2015
Cast: Sami Metwasi, Ramzi Maqdisi, Riyad Sliman