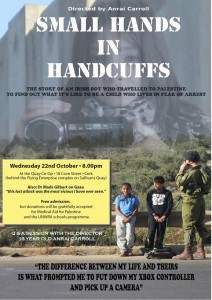 In Oct 2013, 16 year old Anrai Carroll from Ireland travelled to Palestine to make a film on child arrests. Armed with two tiny video camera and with little prior video experience, he travelled with his mum to the West Bank where he met and interviewed two boys his own age to hear what its like to be arrested in the middle of the night by the Israeli Army and to live in fear of that knock on the door at 2am in the morning.
The film charts not just the physical journey of 4,000km from Ireland to Palestine, but Anrai’s emotional journey from boy to young man.