[Dublin] Film Screening: On the Side of the Road + Q&A with Director Lia Tarachanksy (IPSC & Progressive Film Club) 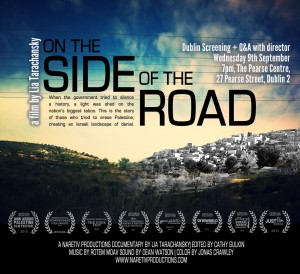 The Ireland-Palestine Solidarity Campaign in association with the Progressive Film Club is proud to host a premiere screening of the award-winning ‘On the Side of the Road’ by Israeli director Lia Tarachansky on Wednesday 9th September 2015, at 7pm in the Pearse Centre (aka The Ireland Institute), 27 Pearse Street, Dublin 2.

Organised by the Ireland-Palestine Solidarity Campaign in association with The Progressive Film Club.