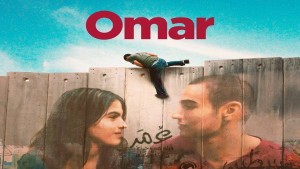 Omar (2013) is a Palestinian story of love and friendship, amidst the brutality of the Israeli occupation and oppression of Palestine.

As well as being the Palestine Oscar nomination for Best Foreign Language Film, Omar won the 2013 ‘Un Certain Regard jury prize at the Cannes Film Festival.

Tthe film will be introduced by John Reynolds, lecturer in Maynooth University’s Department of Law. John is also a member of Academics for Palestine and has worked for several years in the West Bank as a researcher for Palestinian human rights organisation Al-Haq, and continues to work with a number of social movements and civil society organisations.