[Dublin] Film Screening: Not Just Your Picture – The Story of the Kilani Family (AFP & INMENAS) 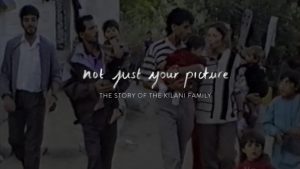 Not Just Your Picture – The Story of the Kilani Family

Anne Paq will be with us to introduce the film, and for a Q&A session afterwards

The event is free but please BOOK TICKETS HERE

Not Just Your Picture tells the story of two young German-Palestinian siblings, Ramsis and Layla Kilani, who had their life shattered one early morning during the summer of 2014 when their father, Ibrahim, together with his second wife and their five young children, was killed by an Israeli airstrike during the attacks on Gaza.

Thrust into an accelerated process of politicization and rediscovery of their Palestinian roots, the two struggle to find justice for their family while trying to make sense of a political reality that not only allows for such atrocities to happen, but even attempts to silence any criticism of it.

Born in 1976, Anne Paq has been a member of the Activestills Collective since 2006. She is an award-winning freelance photographer and videographer who has lived and worked in Palestine for over a decade.

Born in 1981 in Jerusalem, Dror Dayan is a filmmaker, political activist and film scholar based in Berlin and Liverpool.