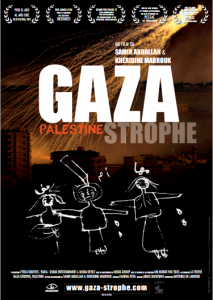 Palestine is more a metaphor when Samir Abdallah & Khéridine Mabrouk enter Gaza on the 20th GetInline-2January 2009. Soon after the second Israeli war against Gaza, they discover the extent of the “Gaza-Strophe” side by side with their friends – Palestinian delegates of human rights. Stories of dozens of witnesses enable them to understand the extent of the Palestinian nightmare. But beyond their suffering, The Gazaoui “always wear the burden of Hope” which they keep alive through poetry,
songs and nokta (jokes or story telling)…

Colonel Desmond Travers, member of the famous Goldstone Commission :
“We visited the same places. The film confirms our findings many months
later. It is important that people should be allowed to see the film and make up their own mind on what happened during those three weeks, when the Israeli forces attacked. In fact, the 500 pages Goldstone report, describes facts in a technical and judicial language which might put some people off from reading it. By watching the film, I was made to remember that the situation in Gaza has worsened still since those images were filmed, a year and a half ago.”