[Dublin] Film Screening: A World Not Ours (JDIFF) 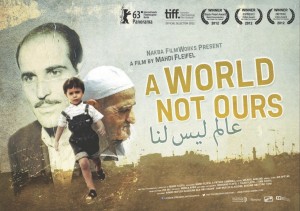 The award-winning Palestinian film ‘A World Not Ours’ will be screened on Saturday 15 Feb  in Cineworld (Screen 12) at 1.45pm as part of the Jameson Dublin International Film Festival (JDIFF).
Writer-director: Mahdi Fleifel
2012 – Lebanon/UK/Denmark/UAE – 93 minutes
Winner, Best Film in the International Competition, Edinburgh International Film Festival
Winner, Peace Film Award, Berlin Film Festival
Winner, Best Documentary, Abu Dhabi Film Festival
A festival favourite with critics and audiences in 2013, A World Not Ours opens at the ICA in London on February 21st and is available for screenings across the UK and Ireland.
The film is an intimate, humorous portrait of three generations in exile in the refugee camp of Ein el-Helweh in southern Lebanon. Based on a wealth of personal recordings, family archives, and historical footage, the film is a sensitive and illuminating study of belonging, friendship and family. Filmed over more than 20 years by multiple generations of the same family, A World Not Ours is more than just a family portrait; it is an attempt to record what is being forgotten, and mark what should not be erased from collective memory.
“A World Not Ours is a dazzling act of first person filmmaking that hits notes on a far-ranging emotional scale from tears to laughter. Director Mahdi Fleifel makes us feel for his family, friends and home as strongly as if they were our own. His themes are universal, yet they are also rooted in a specific place that you’ve probably never seen in a movie before: the Palestinian refugee camp of Ain El-Heweh in Lebanon. Mahdi spent his formative years in the camp in the 1980s before his family settled in Denmark. For years, he’s been returning and keeping a video diary. At the heart of the film is Mahdi’s relationship to his friend Abu Iyad. They share an obsession with World Cup soccer and Palestinian politics, but Mahdi has the ability to come and go while Abu Iyad does not. That inequity makes their friendship extra precious and also susceptible to tension.” (Thom Powers, Toronto IFF)

Screened as part of the Jameson Dublin International Film Festival.