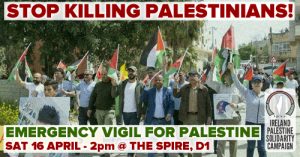 On Saturday 16th April there will be an Emergency Vigil for Palestine between 2pm and 3pm at the Spire on Dublin’s O’Connell Street.

This protest is in response to the escalation of violence by Israeli occupation forces over the past two weeks, which has seen at least 12 people – including three children – shot dead and scores of others wounded since the beginning of the Islamic holy month of Ramadan; eight people have been killed in the past four days alone.

As April 17th is Palestinian Prisoners’ Day, it it important to highlight that Israel now holds 4,450 Palestinian political prisoners in its apartheid jails, where torture, abuse and mistreatment is widespread. These include 160 children, 30 women, and over 500 people interned without even the pretence of a trial.

Largely ignored by the world’s media and the international community, Apartheid Israel continues its racist and murderous violence against the Palestinian people with impunity.

We ask you to stand with us this Saturday to let Palestinians know they are not alone in their struggle for freedom, justice and equality!