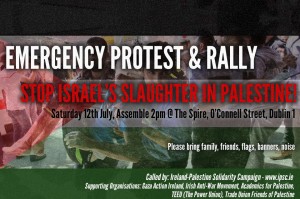 Protest & Rally in solidarity with the Palestinian people

Please bring friends, flags, banners, noise. We would ask that you do not bring party-political flags.

The Israeli state has launched a fresh assault on the Palestinian people, a collective punishment of a captive population. At the time of writing, around 36 people have been killed in bloody airstrikes in Gaza, including at least 9 children. Israeli occupation forces have launched hundreds of attacks on the people of Gaza, and injured scores. Attacks have also been taking place in the West Bank for the past month, where at least 9 people were killed.