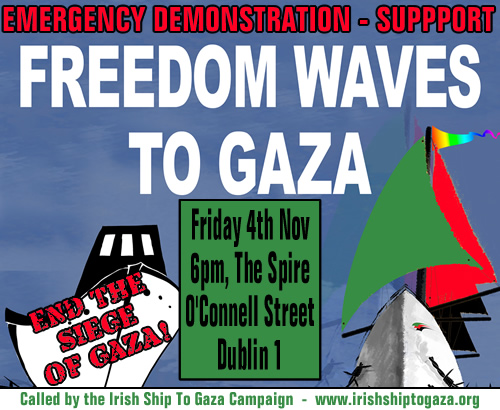 At 7.30pm tonight (Thursday) the Irish Ship To Gaza shore team were informed that Israeli warships were seen 6 miles from the Irish (MV Saoirse) and Canadian (Tahrir) ships attempting to break the siege of Gaza. The ships are currently in international waters around 200 miles from Gaza. Israeli spotter planes were also observed flying overhead according to Fintan Lane, who is on board the Irish ship Saoirse. Crew and passengers on the boats fear being boarded tonight.

The Irish Ship To Gaza campaign calls on people to mobilise to call for an end to the illegal Israeli siege of Gaza and to support the #FreedomWaves ships by attending this demo tomorrow at 6pm at the Spire in O’Connell Street Dublin 1.

Organised by the Irish Ship To Gaza campaign – http://www.irishshiptogaza.org