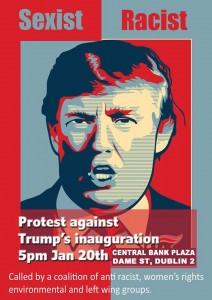 The election of Donald Trump to the single most powerful office in the world cannot fail to alarm progressive people everywhere.

It is truly shocking that a man who boasted of sexually assaulting women will now be installed in the White House. It is appalling that a politician who threatened to bar all Muslims from entering the USA and talked of putting all Muslims on a register, who pledged to build a wall on the border with Mexico and called Mexicans ‘rapists’, who openly incited violence at his rallies, who denies climate change and plans to boost coal production, and whose ‘macho’ nationalistic posturing presages more war, will now be President of the United States.

Equally disturbing is the array of far right racists, anti-choice sexists, Christian fundamentalists, rightwing military and Goldman Sachs executives he has appointed to his government team.

All of this cannot fail to have a major international impact. It will encourage racists, sexists, fascists and the far right everywhere and his climate change denial threatens the whole future of the human race.

In the US itself there have been massive protests against Trump – it is important to remember he lost the popular vote and was elected by well under 25% of the electorate. There will be nationwide protests at the time of his inauguration. We believe we should stand in solidarity with these protests by organising a rally in Dublin and, wherever possible in other towns across Ireland.

Organsied by a coalition of anti-racist, women’s rights, environmental, anti-war, international solidarity and progressive groups, including: