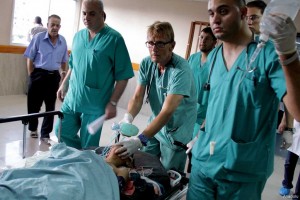 Norwegian surgeon Dr. Mads Gilbert, who worked in al-Shifa hospital in Gaza during the attacks last year, is coming to Ireland to give a talk on his experiences, including the siege of Gaza. During the 90 minute talk Dr Gilbert will show footage taken during the attacks as he recounts the harrowing events he witnessed while working in Gaza’s main hospital. The talk will also address the BDS campaign and the effect international solidarity movements are having in Palestine.

Dr. Mads Gilbert’s letter to Obama from last summer’s attacks speaks volumes of the human suffering he witnessed while in al-Shifa hospital:

The last night was extreme. The “ground invasion” of Gaza resulted in scores and carloads with maimed, torn apart, bleeding, shivering, dying – all sorts of injured Palestinians, all ages, all civilians, all innocent.

The heroes in the ambulances and in all of Gaza’s hospitals are working 12-24 hour shifts, grey from fatigue and inhuman workloads (without payment all in Shifa for the last 4 months), they care, triage, try to understand the incomprehensible chaos of bodies, sizes, limbs, walking, not walking, breathing, not breathing, bleeding, not bleeding humans. HUMANS!

Now, once more treated like animals by “the most moral army in the world” (sic!).

My respect for the wounded is endless, in their contained determination in the midst of pain, agony and shock; my admiration for the staff and volunteers is endless, my closeness to the Palestinian “sumud” gives me strength, although in glimpses I just want to scream, hold someone tight, cry, smell the skin and hair of the warm child, covered in blood, protect ourselves in an endless embrace – but we cannot afford that, nor can they.

Ashy grey faces – Oh NO! Not one more load of tens of maimed and bleeding, we still have lakes of blood on the floor in the ER, piles of dripping, blood-soaked bandages to clear out – oh – the cleaners, everywhere, swiftly shovelling the blood and discarded tissues, hair, clothes,cannulas – the leftovers from death – all taken away … to be prepared again, to be repeated all over. More then 100 cases came to Shifa in the last 24 hrs. Enough for a large well trained hospital with everything, but here – almost nothing: no electricity, water, disposables, drugs, OR-tables, instruments, monitors – all rusted and as if taken from museums of yesterday’s hospitals. But they do not complain, these heroes. They get on with it, like warriors, head on, enormously resolute.

And as I write these words to you, alone, on a bed, my tears flow, the warm but useless tears of pain and grief, of anger and fear. This is not happening!

An then, just now, the orchestra of the Israeli war-machine starts its gruesome symphony again, just now: salvos of artillery from the navy boats just down on the shores, the roaring F16, the sickening drones (Arabic ‘Zennanis’, the hummers), and the cluttering Apaches. So much made in and paid by the US.

I invite you – spend one night – just one night – with us in Shifa. Disguised as a cleaner, maybe.

Nobody with a heart AND power could ever walk away from a night in Shifa without being determined to end the slaughter of the Palestinian people.

But the heartless and merciless have done their calculations and planned another “dahyia” onslaught on Gaza.

The rivers of blood will keep running the coming night. I can hear they have tuned their instruments of death.

Please. Do what you can. This, THIS cannot continue.”
Mads Gilbert MD PhD
Professor and Clinical Head
Clinic of Emergency Medicine
University Hospital of North Norway