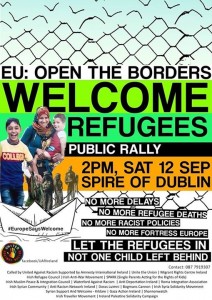 Many of those fleeing war, terror, repression and hardship in the Middle East and Africa are Palestinians – some are refugees for a second or third time. The Ireland-Palestine Solidarity Campaign is proud to endorse this demonstration calling on the Irish government to do more for refugees and migrants trying to reach Europe via dangerous journey in which thousands of people have died. In many cases eitehr Western intervention, or Western indifference, has caused the crises which have led to the creation of the problems faced by these people. Therefore it’s not enough to merely take in those seeking better lives, the Irish government must seek to remedy the root causes, including supporting sanctions on Israel until it respects international law, ends it occupation of Palestine and allows the millions of Palestinian refugees to return to their homes, a right denied them for almost 70 years.

Public Demo: Call on the Irish government to take in more refugees

There is now an international/European wide momentum on this and various organisations are calling for rallies on the same day as “European Day of Action”. It would be important to be part of this international momentum.

Fleeing war is not a sin. Refugees – let them in!

From the wars and from the seas: We should welcome refugees!

The refugee crisis continues to unfold in front of our eyes, with news of more deaths, border closures, arrests but also very strong and committed acts of solidarity from people across Europe and beyond.

All the different forms of solidarity – be it raising national awareness or direct action of delivering much needed goods and supplies to stranded refuges or putting demands on our own governments – are very much part of the general and wider sentiments of solidarity with the refugees. These are complimentary, humanitarian, socially conscious, political pieces of the bigger picture.

Having witnessed the dead bodies of refugees – including children – taken out of the waters of the Aegean, all of these initiatives are very valuable and important. The refugees in Europe and beyond do see these acts of solidarity and these are all parts of our collective hope and struggle for a different world where no child needs to die in search of life…

There are local, national and international initiatives. This rally following the strongly supported petition of 14000 in just 3 days aims to voice our views that more, much more should be done to help the already suffering refugees and that, as well as taking part in international solidarity actions, we must also call on our government to act.

For too long and too many times the European governments have been engaged in a number game and racing to the bottom – in competition with each other – in terms of who should get what least possible number of refugees.

Since end – 2014, there have been many things presented to us as the cause of the refugees coming to Europe.
It was the ‘summer season and the calm seas’, or ‘the smugglers’, or ‘the pull factor of rescue operation’ (as supposed to the push factors of war and death etc.) or the EU-neighbouring governments not stopping refugees from entering Europe. In fact none of these were the actual cause of the refugee crisis.

It may well be that there is no quick-magic answer to the real causes of the problem but as the EU leaders continue to talk and debate more refugees are dying, more children are sleeping rough, they are missing valuable years of their lives, more mothers and fathers crying.

Our immediate duty should be to demand that our government must do more, a lot more. It is important to realise that we have such a duty here at home…
The number game should stop and European Union (in a united fashion) but also the individual countries should do the right thing before it’s really too late for thousands of innocent people.

Many appraise countries like Jordan, Lebanon, and Turkey etc. for taking in millions of refugees. It is great that these countries – not as rich as any of the EU countries – have taken in so many refugees but this appreciation should go hand in hand with sharing the care for refugees.
For millions of refugees in the above countries above, the reality is not as good as it may look. Most of them are not recognised as ‘refugees’ and therefore don’t have civic-economic-educational rights. They are not allowed to work. Hundreds of thousands of them are homeless… literally sleeping on the streets for months… Winter is coming. They are in these countries under the scheme of ‘temporary protection’ – which gives them no guarantee for future. They cannot go back to their home countries. Who would/could take their families – children to Syria?
Millions of refugees in a few countries living in desperate conditions… That is the reality.

There are up to 300K refugees in middle-east originating from Afghanistan and Iraq wars. More than a decade later, their forgotten miseries and uncertainty continue on.

The EU should open the borders and take in the refugees.
A just-fair system should be put in place to accommodate refugees in different EU countries.

We are calling on the Irish government to do the right thing and take in more, many more refugees

Let the refugees in. Not one child left behind…

Organised by United Against Racism