[Dublin, DCU] Film Screening: Even Though My Land is Burning with discussion with Dror Dayan (DCU SJP) 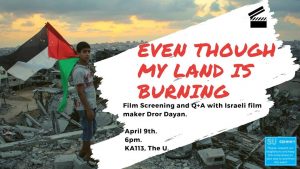 Join us on April 9th at 6pm on Glasnevin campus for DCU Students for Justice in Palestine’s last event of the year as we host a film screening and discussion with Israeli film maker Dror Dayan.

Dror Dayan’s Even Though My Land is Burning is an acclaimed feature documentary that follows Israeli activists taking part in the Palestinian non-violent resistance in the West Bank.

Born in Jerusalem, Dayan has worked as journalist and videographer in Germany, focusing on politics and culture. He is currently a lecturer in the Faculty of Media and Communication at Bournemouth University, teaching documentary theory and practice, editing and directing, and has recently finished his practice-led PhD research on the politics of documentary film.

He has worked on numerous fiction and documentary productions as cinematographer and editor and is active in social justice campaigns, including the Palestine solidarity movement.

“‘Even Though My Land is Burning’ is the result of a three­-year process during which I attempted to analyze the role of Israeli activists in the Palestinian popular struggle today, especially through the perspective of a struggle towards a “one-­state solution.” It is the result of numerous trips to Palestine, filming by myself with whatever equipment I could afford or borrow. Of course as an Israeli Jew myself, albeit one who left the country a decade ago, it was also a very personal journey and one which has further sharpened my private political understanding of the place I grew up in”. – Film-maker Dror Dayan

Hosted by DCU Students for Justice in Palestine