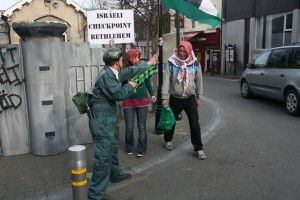 Dublin will witness an evocative piece of street theatre when the Ireland Palestine Solidarity Campaign (IPSC) will stage “Israeli Checkpoint Bethlehem”. It which will feature a scale model of Israel’s West Bank wall and actors portraying Israeli soldiers and Palestinians. The aim is to highlight the routine difficulties, restrictions on freedom of movement and humiliations faced by people in the occupied Palestinian territories as they attempt to go about their daily lives.

The piece aims to highlight the shameful role of Irish cement multinational CRH plc who is profiting from Israel’s occupation through the sale of cement used for the construction of the Separation Wall and the illegal settlements in the West Bank. We will also be drawing attention to the issue of Palestinian political prisoners, many of whom will have been arrested at checkpoints just like this one. There are currently over 4,600 Palestinian political prisoners in Israeli jails. Currently some 2,000 are on hunger strike, eight of whom are currently in serious condition, protesting against their ill treatment by the Israeli state.

Members of the IPSC will be manning an information stall and collecting signatures for their petition calling on CRH to divest from its unethical investments in Israel, in advance of its presentation to the CRH Annual General Meeting at a protest on Wednesday 9th May in Dun Laoghaire.