[Dublin] Conference on Palestine: Where now for the two state solution? – Solidarity and Sanctions (SIPTU) 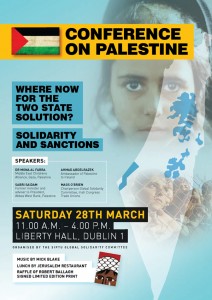 Conference on Palestine: Where now for the two state solution? – Solidarity and Sanctions

Note that DR MONA EL FARRA of the Middle East Children’s Alliance and Palestinian Red Crescent, who was to have been a speaker at this event has been prevented by Israeli and Egyptain authorities from leaving Gaza.

You can listen to a heartbreaking interview with Dr. El Farra on RTE’s Drivetime by clicking here (interview starts at 1hr 39mins). In the interview Dr El Farra describes the terrible trauma that people in Gaza are subjected to by Israel’s attacks and illegal siege. She also talks about the nine members of her family murdered in Israel’s assault last summer.