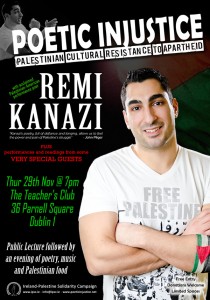 The event will take place on Thursday 29th November, beginning at 7pm in the Teachers’ Club, 36 Parnell Square West, Dublin 1. Entry is free (donations are welcome), but spaces are limited so come early to avoid disappointment.

Joining Remi on the night will be some very special Irish and international guests who will recite poems and/or perform musical pieces.

Following the performances there will be traditional Palestinian food served and people can chill out, relax and chat.

Remi Kanazi is a poet, writer, and activist based in New York City. He is the author of the new released collectionof poetry, Poetic Injustice: Writings on Resistance and Palestine and the editor of Poets For Palestine (Al Jisser Group, 2008). His political commentary has been featured by news outlets throughout the world, including Al Jazeera English, GRITtv with Laura Flanders, and BBC Radio. His poetry has taken him across North America, the UK, and the Middle East, and he recently appeared in the Palestine Festival of Literature as well as Poetry International. He is a recurring writer in residence and advisory board member for the Palestine Writing Workshop as well as an organizing committee member for the US Campaign for the Academic and Cultural Boycott of Israel.

“Some poetry is meant to make you sit in quiet contemplation. Not
so with Remi Kanazi’s. Read his words out loud for yourself and your
friends. Let their compassionate anger, their intricate dance of ideas,
their unflinching witness, wash over you, dance with you, pick you
up, and spur you to action.”
Ali Abunimah, co-founder of Electronic Intifada and author of One
Country: A Bold Proposal to End the Israeli-Palestinian Impasse

“Remi Kanazi’s poetry, full of defiance and longing, allows us to feel
the power and pain of Palestine’s struggle.”
John Pilger, award-winning journalist, author, and filmmaker

“Back from Gaza, Remi Kanazi’s poems make tears come to my eyes.
Poetry more than any other means communicates what is deepest in
man, what gives us hope beyond crime and despair.”
Stephane Hessel, French ambassador, former French resistance
fighter, and participant in the drafting of the Universal Declaration
of Human Rights

“In Poetic Injustice, Remi Kanazi lines up his word soldiers and marches
into the battle of identity, occupation, loss, and exile. Stripping the spin
and gloss from policies and politics, Kanazi volleys truths from his own
life as a Palestinian-American and as a witness to the oppression and
occupations, state terrorism and racism. A poet with immense power and
bravery, he underlines each phrase, word and line with devotion.”
Elmaz Abinader, author, poet, and PEN Award winner

“I am proud to have Remi Kanazi as a partner-in-rhyme in our global
struggle for peace and justice…his words resonate on paper as much as
his unforgettable delivery does in person!”
Omar Offendum, Syrian hip hop artist and producer