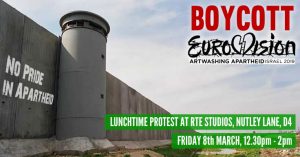 On Friday 8th March, RTÉ will officially announce the name of the Irish Eurovision entrant – and the Irish Campaign to Boycott Eurovison 2019 is calling on supporters to mobilise for a lunchtime protest outside RTÉ. Join us between 12.30pm and 2pm at the Stillorgan Road entrance in Donnybrook, Dublin 4 (map here) to make our voices heard – we do not want to be represented at an artwashing exercise in Apartheid Israel.

Sadly, despite overwhelming support from singers, musicians and other celebrities, public figures, human rights campaigners and members of the public, the national broadcaster RTÉ has refused to listen to the Palestinian call for Ireland not to take part in the 2019 Eurovision Song Contest. RTÉ say the event is ‘non political’, but every shred of evidence points to the contrary – Israel is overtly politicising the Eurovision, and is being allowed to do so by the EBU, and RTÉ.

We have learned that whoever the Irish entrant is, they will perform before 500 soldiers from the Israeli occupation forces (who are getting free tickets); the show will broadcast propaganda showing illegal Israeli settlements in occupied territories; entrants will be hosted in a ‘village’ built on the ruins of a Palestinian area of Jaffa that whose residents were driven out in 1948 and who still cannot return; and that councils in illegal settlements are giving free accommodation to Eurovision fans as a way of promoting these entities which are war crimes under international law.

Israel, in the words of the Foreign Ministry’s former top official Nissim Ben-Shitrit, promotes “culture as a propaganda tool of the first rank” and “[does] not differentiate between propaganda and culture”. RTÉ is allowing itself, and by extension all TV license payers, to be used to bolster Israel’s ‘culturewashing’ propaganda machine as it continues to oppress Palestinians and destroy their lives on a daily basis.

Please join us this Friday to let our voices be heard! 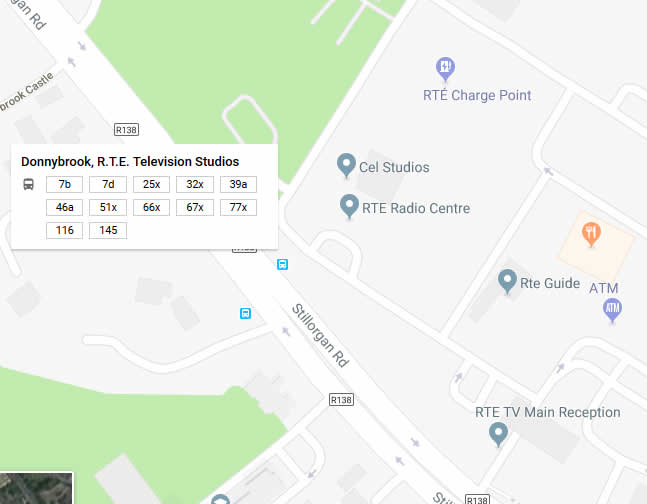