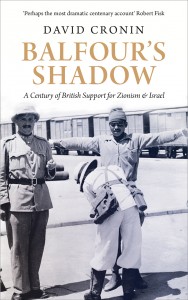 The Dublin branch of the Ireland-Palestine Solidarity Campaign in association with Academics for Palestine is honoured to host the launching of Irish journalist David Cronin’s new book, ‘Balfour’s Shadow: A Century of British Support for Zionism and Israel’ (Pluto, 2017). Join us to hear from David on Monday 23rd October 2017, at 7pm in The Teachers’ Club, 36 Parnell Square West, Dublin 1.

Organised by Ireland-Palestine Solidarity Campaign in association with Academics for Palestine.