[Dublin] BACK BY POPULAR DEMAND: Ghassan Kanafani’s ‘Returning to Haifa’ returns for one week only (2-7 March) in The New Theatre 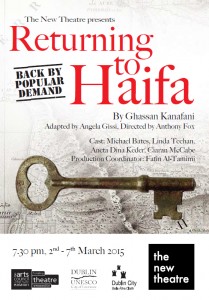 BACK BY POPULAR DEMAND.  After its successful first run last November, this adaptation of one of the most iconic works of Palestinian literature is returning to the stage in Dublin between 2nd and 7th March 2015.

The Ireland-Palestine Solidarity Campaign is honoured to have been able to assist in arranging speakers for the Opening (3 March) and Closing (7 March) Nights, and we encourage all our members and supporters to attend the play. Details of the speakers to be posted once details have been confirmed.

“a remarkably even-handed portrait of dispossession and revisiting”, “Fox and Bates stoke the heat of resistance”, “supple and thought-provoking” – The Irish Times

“At the centre of the piece is a strong, solid performance by Michael Bates… Linda Teehan plays his wife, Safiyya, in an emotional performance.” – The Red Curtain Review