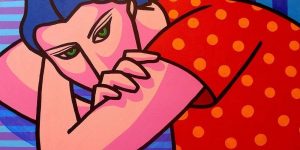 Bethencourt Productions presents a special Literary Cabaret of new writing, drama, music & comedy depicting the extremes to which an individual will go when their human rights are violated.  From the degrading treatment of a woman in her own home, to the hostile occupation and destruction of a nation’s territory and source of livelihood, to advocating for the human right to babysitting, MC & producer Leonor Bethencourt brings artists together to celebrate the power of art to portray and condemn the abuse of human rights in a domestic and international setting.

This event is part of the Smashing Times & Front Line Defenders Festival of Arts & Human Rights in Dublin (19th-29th September).

SEVEN JEWISH CHILDREN – A Play for Gaza by CARYL CHURCHILL, and directed by Peter Reid  will be part of the evenings performances. A collection for Medical Aid for Palestinians will be held on the night.

Writer and Director, Peter Reid envisages a dystopian future where voting and elections are dispensed with, your children can inherit your carbon footprint credits, and artists are sent kicking into determination camp.  With actor Paul Kealyn.

Bethencourt Productions celebrates the second anniversary of this series of monthly literary cabarets at Buswells Hotel.  Artistic Director & MC, Leonor Bethencourt draws from the comedy, music and theatre scene in Dublin, to bring artists together once a month to celebrate literature that challenges, provokes and scandalizes.   With a focus on the unmentionable, the censored and the filthy, in the historical landmark that is Buswells Hotel. Previous cabaret themes: Madness, Gaelic Revival, Gothic Horror, Terrorism, Christmas Family Rows, Women, Road Trips & Forbidden Love.

Tickets:      20euro/18euro (students & OAPs) through Eventbrite and at the door