[Dublin] Art Auction. Fundraising Event for the Al-Helal Children’s Football Team in Gaza to come to Ireland this summer (GK2I) 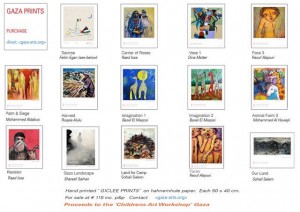 Hosted by Gino Kenny TD.  In aid of Gaza Kids to Ireland.

“Football means everything to these kids,” says Ayed Abu-Ramadan, a director at the Al-Helal club in Gaza. “The sea is right here, but they can’t even go swimming because of the sewage.”

For the children of Gaza, Israel’s attacks and the siege of the territory are real and ever-present. The windows of the Al-Helal clubhouse, located between two overcrowded refugee camps, were blown out by nearby missile strikes last year. Gaza’s main football stadium, a few miles away, was deliberately damaged by other strikes. Poverty and destruction are rampant. The children generally can’t travel beyond this narrow strip of land between the sea, Israel and Egypt.

Gaza Kids to Ireland is a project to bring some young footballers out of Gaza for a short time, giving them a chance to meet other children and to share their stories. A squad of kids and some of the coaches from Al-Helal will travel here next summer, playing games and having fun with peers in Dublin, Limerick, Tipperary and Antrim.

Irish hosts will get the chance to answer the question that seems to be on every Palestinian child’s lips: “Which do you like, Barca or Real Madrid?”

Sports can’t always be free of politics. For example, Israel has made it almost impossible for Gaza’s stars to travel to play for the Palestinian national team. The social circumstances, exacerbated by the siege have frustrated Al Helal’s efforts to field a girl’s team thus far, but they haven’t given up on the project.

But with your help to make this project a reality, a group of Palestinian children will have a new story to tell, one of freedom, friendship, play and solidarity in Ireland