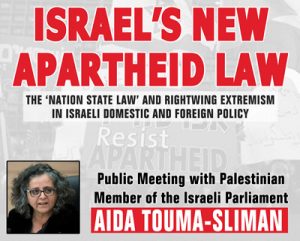 Join us on Thursday 15th November for a unique opportunity to hear from and discuss with Aida Touma-Sliman MK, a Palestinian member of the Israel parliament. Ms. Touma-Sliman will discuss the passage of Israel’s new apartheid ‘Nation State’ law in the context of the growth of rightwing extremism in Israel’s domestic and foreign policy, and the efforts to resist this trend.

The public meeting will take place on Thursday 15th November, at 7.30pm in Wynn’s Hotel, 35-39 Abbey Street Lower, Dublin 1. Entry is free and all are welcome.

This is a rare opportunity to hear first-hand from someone who opposes Israeli state racism, apartheid and militarism from within the very corridors of power.

In July 2018 Israel passed the so-called ‘Nation State Law’, a racist law designed to officially assign second class status to Palestinian citizens of Israel, and to deny their claim to their homeland. It has been widely described and decried as enshrining apartheid inside the state of Israel, where previously Israel had sought to hide official discrimination behind a liberal veneer.

This slipping of the mask is just the latest in a long line escalating measures designed to marginalise Palestinians, whichever side of the Green Line they live on – from the shooting of unarmed protestors in Gaza, to the demolition of villages in the West Bank and Negev, to the crackdown on anti-occupation civil society groups. Meanwhile there has been an uptick in Israeli airstrikes in neighbouring countries and sabre-rattling against Iran and Lebanon. All of these are a legacy of the exponential growth of far right political parties and movements inside Israel over the past two decades, and the continued impunity which Israel enjoys abroad, something now amplified by Trump’s rise to power in the US.

Aida Touma-Sliman MK is a Palestinian member of the Knesset (Israeli Parliament) where she heads the Committee on the Status of Women and Gender Equality. She was elected in 2015 for the Joint List, the coalition of Arab and leftwing parties. She was born in Nazareth into a Christian Palestinian family and earned a B.A. in psychology and Arabic literature from the University of Haifa. Touma-Sliman founded the Arab feminist group Women Against Violence in 1992.

She joined the Hadash party, later becoming editor-in-chief of Al-Ittihad, an Arabic language newspaper. She became the first female member of the High Follow-Up Committee for Arab Citizens of Israel and co-founded the International Women’s Commission for a Just Palestinian-Israeli Peace. In July 2018, following the passage of the ‘Nation State Law’, she penned an article for The Guardian newspaper entitled ‘Netanyahu will be known as the first prime minister of Israeli apartheid’.

Hosted by the Ireland-Palestine Solidarity Campaign, with the assistance of the Global Campaign Against US/NATO Military Bases. 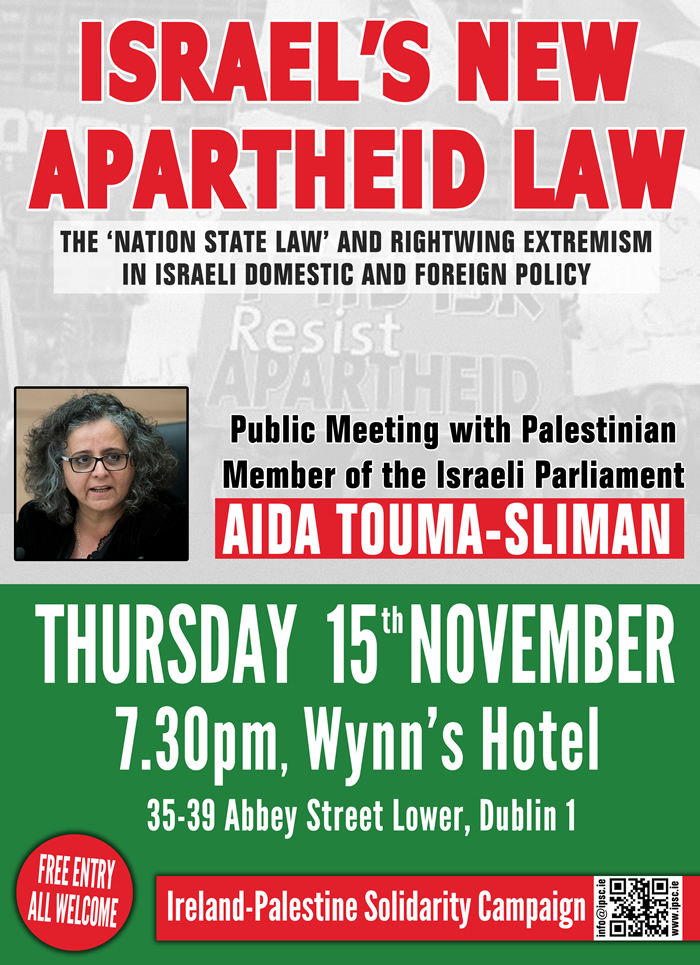