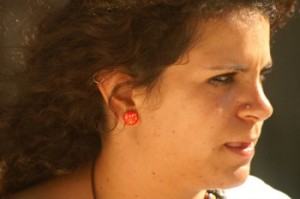 For those who knew Mira Dabit (1985-2012), some of her friends have organsied a small memorial afternoon event to mark the first anniversary of her death this coming Sunday in Dublin. Mira was a former activist with, and Secretary of, the IPSC and a good friend to many of us while she lived on our island. If you knew her, please come along and share the day.

It is fast approaching the 1 year anniversary of the untimely death of our good friend and comrade Mira Dabit. On December 15th 2012 Mira died of a heart attack at the age of only 27. This year we will hold a small get together in the Teachers Club (the room behind the bar, 1st floor) from 3pm to 6pm on Sunday Dec 15th to pay tribute to her memory.

Mira lived in Ireland for three years and made many close friends here. Her skills as a story-teller, her infectious laughter and her strength and steadfastness inspired us all.

Mira was born in East Jerusalem on September 11, 1985 and lived in the West Bank until she was 22. She held a BA in psychology and sociology from Birzeit University.

After college she moved to South Africa, where she worked on collective projects to help with homelessness and unemployment and attended the University of Stellenboch. It was after this, in 2007, that she came to Ireland for an internship at the Glencree Centre for Peace and Reconciliation. She became National Secretary of the Ireland Palestine Solidarity Campaign (IPSC) and was a prominent grassroots activist in Dublin and later in Derry. She also lived and worked in Corrymeela Community in Ballycastle and was involved with a number of activist groups and campaigns in Ireland.

Education became the main focus of Mira’s work and she later moved to the United States where she worked with Jewish Voice for Peace and the Occupy Movement in Washington DC. In 2012 she became co-manager of anti-nuclear project Peace House and led a number of campaigns around media, race and discrimination.

We hope that this event will allow space for people to pay tribute to Mira through music, song, spoken word or whatever media seems appropriate. We extend our deepest sympathies to her parents Bishara and Vera Dabit and her brothers Rabir and Simon in Ramallah.

If you are willing to sing/play or contribute in some other way to this event please send me (Freda) a message here or mail me at palestineeducationdublin@gmail.com. Thanks