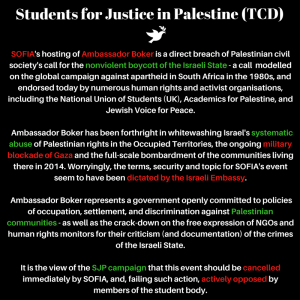 A peaceful protest against the Society For International Affairs’ (SOFIA) hosting of an event with Israeli Ambassador Ze’ev Boker in Trinity College Dublin has been called by Students for Justice in Palestine on Monday 20th February. The protest will be from 6.15pmp to 7pm.

As is clear from the event description, the terms, security and topic of SOFIA in Conversation: The Israeli Ambassador, H.E. Ze’ev Boker have been dictated by the Israeli Embassy – indeed, all attendees will be subject to security checks by agents of the Israeli state. In itself, this is an imbalanced, inappropriate and offensive approach for SOFIA to adopt.

Hosting Ambassador Boker in this fashion is also a direct breach of Palestinian civil society’s call for the nonviolent boycott of the Israeli State – a campaign that has the endorsement of Jewish Voice for Peace, the Israeli Committee Against House Demolitions, Academics for Palestine, the National Union of Students in Britain and others.

Ambassador Boker has publicly denied the existence of Israel’s military blockade of Gaza, has whitewashed the Israeli military’s bombardment of the Gaza Strip in 2014, and is a direct representative of an Israeli government openly committed to illegal policies of occupation, settlement and discrimination.

Protest called by TCD Students for Justice in Palestine. SJP’s statement on why they have called the protest can be read in full here. Below is a summary of that statement.