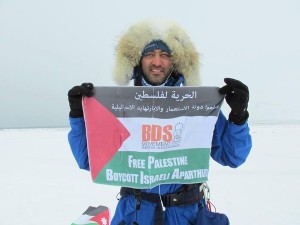 Mostafa has just returned from becoming the first Muslim and the first Arab to reach the South Pole. Before reaching the South Pole he had completed the Seven Summits and made his way to the North Pole. Now, having completed the adventuring grandslam, you are invited to Mostafas talk of his adventures and the launch of his new book in Basecamp Ireland, 108-109 Middle Abbey Street, Dublin D1 on Wednesday 16th March at 7pm.

“Born in Kuwait to Palestinian refugee parents, a chance meeting led Mostafa Salameh first to London and then to Edinburgh, where he partied to excess, despite having little money. Islam played almost no part in his thinking. Yet it was in Edinburgh that Mostafa had a dream a profoundly religious experience that would see him renew his faith and change the course of his entire life.

One night, Mostafa dreamt that he was standing at the highest point in the world reciting the call to prayer. Despite having no prior mountaineering experience or training, he was inspired to follow his vision and climb Mount Everest. He failed to summit twice before finally reaching the top in 2008 going on to become the first Palestinian ever to reach the North Pole, and to scale the Seven Summits . By 2016 he will have reached the South Pole, the first Muslim ever to have done so.

Yet exploring is only half the story. Now a devout Muslim, Mostafa is committed to spreading the message of tolerant Islam. A motivational speaker and activist, he is working to turn Arab youth away from radicalisation. Through climbing, he has raised hundreds of thousands of pounds for charity. At a time when positive images of Islam can seem few and far between, Dreams of a Refugee tells Mostafa s remarkable story, one of extraordinary faith and positivity. His message for our sceptical times is simple: that each of us has an Everest inside us, which we all can summit if only we dare to dream.”