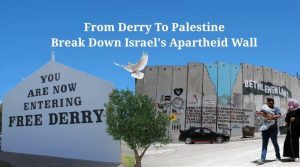 THE WALL OF SOUND ON “THE WALLS”

Join Derry IPSC, Derry Anti-War Coalition & lots of friends on Saturday 10th March at 2pm to make some noise for Palestine. Beginning on the Derry Walls at Ferryquay Gate where we will gather to create the “wall of sound”. After that there will be a street installation between Richmond Centre and Foyleside Centre – To show the impact HP has on Palestinians imprisoned by the Israel State. We will also be gathering signatures for the HP Boycott Pledge. Our day of action will finish with a protest at Argos against the sale of HP products and HP’s complicity in the oppressive military, apartheid occupation that Palestinians are living under.

THE SEPARATION BARRIER, MORE ACCURATELY KNOWN AS:
THE APARTHEID WALL

The apartheid wall is the most pertinent symbol of the system of Israeli apartheid. However, it is just one part of a bigger system which is designed to permanently oppress the Palestinian people. It is supported by a system of segregation in which two people live side by side but our governed by different laws, drive on separate roads and have different rights. Israeli citizens and internationals move freely throughout Israel and the OPT. But, Palestinians freedom of movement is restricted by checkpoints and roadblocks. According to survey carried out by OCHA, in 2o11, Palestinians encountered 522 restrictions of movement. These restrictions mean that journey times for Palestinians are extended by two to five times. Palestinians are forced to carry ID cards at all times, these demarcate where they are allowed to travel. Palestinians in East Jerusalem have blue IDs; Palestinians in the West Bank and Gaza have green IDs. Settler violence is a growing threat to Palestinians. According to Yesh Din, the number of attacks resulting in casualties and damage to property has increased by 144% from 2009 to 2011. These crimes are carried out with virtual impunity, between 2005 and 2012 91% of investigations carried out by Israeli authorities into settler violence were closed without indictment.* Conversely, Palestinians prosecution rates under Israeli military law are close to 100%. (Courtesy of Katie Duffus Personal Blog of a volunteer in Palestine).