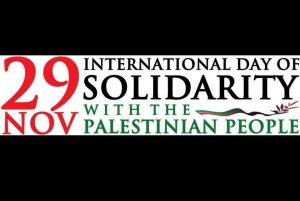 Derry Branch of Ireland Palestine Solidarity Campaign is holding a candlelit vigil to mark International Day of Solidarity with the Palestinian People.
The date of 29 November was chosen because of its meaning and significance to the Palestinian people. On that day in 1947, the General Assembly adopted resolution 181(II), which came to be known as the Partition Resolution. That resolution provided for the establishment in Palestine of a “Jewish State” and an “Arab State”, with Jerusalem as a corpus separatum under a special international regime. Of the two States to be created under this resolution, only one, Israel, has so far come into being.

The Palestinian people, who now number more than 8 million, live primarily in the Palestinian territory occupied by Israel since 1967, including East Jerusalem, part of which is now administered by the Palestinian Authority; in Israel; in neighbouring Arab States; and in refugee camps in the region.

The International Day of Solidarity has traditionally provided an opportunity for the international community to focus its attention on the fact that the question of Palestine is still unresolved and that the Palestinian people is yet to attain its inalienable rights as defined by the General Assembly, namely, the right to self-determination without external interference, the right to national independence and sovereignty, and the right to return to their homes and property from which they had been displaced.