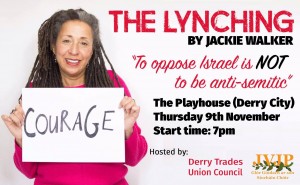 Suspended from the British Labour Party and vilified with fake accusations of antisemitism, Jackie Walker tells the story of her extraordinary activist parents and her own struggles fighting different forms of racism in the US and UK. This is an opportunity to hear first hand from someone who has been hounded relentlessly in the media.

The Lynching trailer is at ‪https://m.youtube.com/watch?v=Juq9r6q_6UE‬‬‬‪‬‬‬‬

See the situation for yourself in Al Jazeera’s undercover investigation The Lobby. Jackie’s story starts at 12 minutes in. https://www.youtube.com/watch?v=Vuk1EhkEctE