[Derry] Talk & Exhibit on Palestinian refugees: The Right of Return – From the Nakba to today’s refugee crisis with Lubna Shomali (IPSC & DTUC) 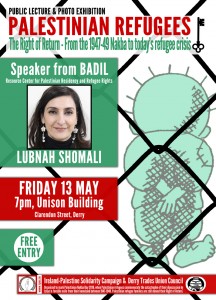 To mark Nakba Day 2016 the Ireland-Palestine Solidarity Campaign and Derry Trades Union Council are honoured to present Lubna Shomali from BADIL , Resource Center for Palestinian Residency and Refugee Rights. She will speak on Friday 13th May in the UNISON Building, Clarendon Street, Derry at 7pm. There will also be an exhibition of photographs.

BADIL Resource Center for Palestinian Residency and Refugee Rights BADIL is a Palestinian human rights organization established in 1998, dedicated to defending and promoting the rights of Palestinian refugees and internally displaced persons (IDPs), regardless of their geographic location, according to the frameworks of international humanitarian, human rights and refugee law. BADIL is one of the leading and respected resources on historic and contemporary forcible transfer and the Palestinian refugee and IDP issue. BADIL has special consultative status though a partnership framework with UN ECOSOC, allowing it and its partners to engage regularly and assertively with all UN mechanisms. BADIL works to engage and empower Palestinian and international civil society to advance a rights-based solution according to international law.

Lubnah Shomali is BADIL’s Administrative and Financial Affairs Manager. As a Palestinian human rights defender and activist, Mrs. Shomali will present BADIL’s comprehensive rights-based approach to the Palestinian-Israeli conflict, with a focus on forced population transfer, refugees and internally displaced persons, according to international humanitarian and human rights law. Mrs. Shomali relocated with her family to her hometown in the West Bank in the summer of 2008. She worked with Beit Sahour Municipality for three years as their International Relations Officer before signing on with BADIL Resource Center in 2012.