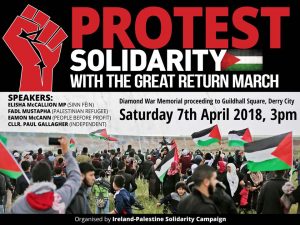 Last Friday, tens of thousands of Palestinians in Gaza gathered at the border fence for the beginning of the Great Return March home to the land and homes stolen from them and their forbears in 1948. They were met with lethal, accurate pinpoint brutality. Shoot-to-kill snipers, tanks with artillery, drones with teargas rained down upon peaceful unarmed protesters. 15 Palestinians lost their lives, murdered by Israeli Occupation Forces. Hundred more were injured, many seriously.

We call on the Irish & British governments, the EU and the United Nations to take action against Israel’s war crimes and total impunity. We demand the expulsion of Israeli diplomats from Ireland and for sanctions to be imposed. It is not enough to churn out pointless platitudes time after time while Israel continues to flout international law and conventions.

Palestinians in Gaza live under a brutal siege imposed by Israel and enforced by Egypt and the inaction of the International Community. They are exercising their legal right enshrined in UN Resolution 194 – the right of return.

PLEASE COME OUT AND SHOW YOUR SUPPORT FOR PALESTINE AND ANGER AT THE BRUTALITY OF THE ISRAELI OCCUPATION FORCES. Assemble 3pm at the The Diamond War Memorial and march to Guildhall Square