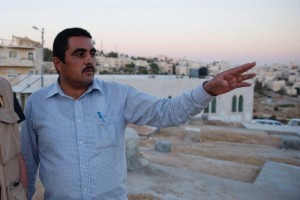 As a human rights activist in Hebron, Palestine, Badee Dwaik has devoted his life, strength and patience to the pursuit of freedom and justice. Come hear him speak on Friday 13th October 2017 in the Unison Building, 1 Clarendon Street, Derry.

This year marks the centenary anniversary of the Balfour Declaration: the British declaration that set in motion the partition of Palestine and the eventual removal of hundreds of thousands of Palestinians from their homes. Life for Palestinians is now a constant battle for basic rights and freedoms, a battle the Badee has fought ceaselessly.

About Badee:
Badee was born in Hebron in 1973. He was 14 years old when the 1st intifada started in 1987. He would attend demonstrations with his father who, like so many others, was arrested in 1988 (and released after 6 months). His crime: being the deputy president of the Workers Union and one of the many leaders of the Intifada movement.

As a young adult, Badee obtained a degree in Social Work from Al Quds Open University before being arrested himself in 1993 after Oslo agreements at the age on 20. He stayed in jail for 3 years.

Badee Founded the Human Rights Defenders, a group that exposes the daily atrocities committed against Palestinians. It teaches Palestinian civilians how to understand when human rights abuses have been committed against them and how to report them. Badee has also co-founded a number of additional campaigns and projects including, the national campaign to lift closures from Hebron, the Capturing Camera Project training students in documentating of human rights buses, the Solidarity for Palestine movement and the Free Shireen Issrawi campaign.

Hosted by the Derry branch of the Ireland-Palestine Solidarity Campaign