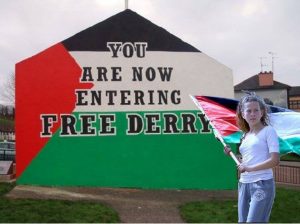 On Tuesday 30th January Ahed Tamimi will turn 17. To mark her birthday, along with other solidarity groups around the world, Derry IPSC & Derry Anti-War Coalition will be holding a vigil at 6.30pm at Free Derry Corner.

“Ahed has been called the ‘Rosa Parks of Palestine’. For years, she and her family have bravely stood up against the Israeli occupation. But she now faces up to 10 years in prison over an altercation with Israeli soldiers.

On 15 December, Ahed Tamimi and her family were protesting against Trump’s decision to recognize Jerusalem as the capital of Israel. In a horrifying turn of events, Ahed’s 14-year-old cousin, Mohammed, was shot in the head at close range by an Israeli soldier. He required intensive surgery, where part of his skull was removed, in order to dislodge the rubber bullet.

Later that day, Ahed also came face to face with Israeli soldiers, when they entered the yard of her family’s house. A video, which has since gone viral, shows the unarmed teenage girl slapping, shoving and kicking two armed Israeli soldiers who are wearing protective gear. It was clear she posed no actual threat to them – as they lightly swatted her advances away. But now she could face up to 10 years in prison – a punishment which is blatantly disproportionate.

On 19 December, Ahed’s home was raided by Israeli soldiers during the night. She was arrested – and now faces charges of aggravated assault, obstructing the work of soldiers, and incitement.

In detention, she endured aggressive interrogations, sometimes at night, and threats made against her family. Her trial before an Israeli military juvenile court is imminent – we must mobilise quickly and effectively.

There is nothing Ahed Tamimi has done that can justify the continuing detention of a 16-year-old child. She is one of approximately 350 Palestinian children held in Israeli prisons and detention centres. ” (Amnesty International)